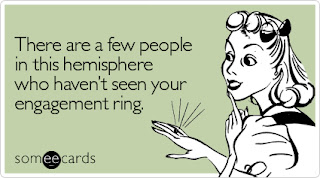 Carat, Cut, Color, Clarity…. It can all be so overwhelming when selecting an engagement ring.  More fascinating than the 4Cs of the diamond are usually the stories behind the engagement ring.
We’ve all heard (well maybe I just aged myself) of the Taylor-Burton ring which was so large (69 carats – holy smoley!) Elizabeth Taylor later decided to have it designed into a necklace.  After her divorce from Richard Burton, Elizabeth Taylor auctioned the ring and used the profits to fund a hospital in Botswana.
Perhaps our brides are more familiar with the sapphire engagement ring Prince William presented to Kate Middleton.  This beauty worn previously by Princess Diana reminds us that engagement rings don’t necessarily have to adorn a diamond as it’s central stone.  The ring was originally bequest to Prince Harry, however, Harry decided the ring should be worn by the future Queen of England and gave it to Prince William to give to his fiancee.
In Nordic countries, engagement rings (plain gold bands) are worn by both men and women, a tradition that is becoming popular in North America.
Gimmal rings, or Turkish Wedding Rings, were used as wedding rings becuase if the wearer took off the ring in order to cheat on his or her spouse, they would be unable to put it together again in time to avoid discovery. In North America and the United Kingdom the engagement and wedding rings are worn on the left hand ring finger.  This custom may have originated in an ancient Egypt myth that the finger contained the vena armoris (or “vein of love”) leading directly to the heart.  In Germany, the ring is worn on the left hand while engaged and then moved to the right hand when married. In Poland, the engagement and wedding rings are traditionally worn on the right hand.
My personal favorite are Claddagh rings from Ireland.  These rings are given as a token of friendship, love or marriage.  The design is distinctive with two hands clasping a heart adorned with a crown.  The symbolism of the elements correspond to love (the heart), friendship (the hands) and loyalty (the crown).  How the ring is worn convey’s the wearer’s relationship status. History of engagement rings.